The events have been held in Reno since 1996 in conjunction with the Reno Rodeo and the Bob Feist Invitational (BFI), which Ullman Peterson Events purchased from Feist in 2012.

This is the 20th annual Reno Rodeo Invitational.

“On the 20th anniversary of amateur team roping’s most prestigious events, we are proud to announce our acquisition of the ‘One Day One Million’ RRI and Ladies Only events from Perry,” said Ullman of Santa Ynez, Calif., who with his wife, Kristi, owns real estate in Hollywood and cattle ranches on the West coast.

The high-stakes #11 jackpot was the first amateur-only roping in this country to provide a purse of $1 million in just one day. Di Loreto’s goal when he started the roping was to assemble the finest equally-matched amateur ropers in the country and provide them top-quality production staff, sponsorship from industry leaders, and unparalleled payoffs – all while also raising funds for charity.

“The success of the RRITR has been most gratifying because we not only were able to take amateur jackpot team roping to the highest level money-wise, but more importantly because of the good causes we have been able to support in our community since 1996,” said Di Loreto. “We cannot think of two finer gentlemen in the team roping world than Corky and Daren to now take the reins.”

A real-estate developer for more than 40 years, Di Loreto took up roping when he was 47 years old. He won the Reno Rodeo Invitational in 2005 and purchased his PRCA card at age 55.

“Over the last 20 years, I can say the RRITR has been a “trifecta” win for me personally,” he said. “My daughter Teresa and I have produced a successful nationally recognized invitational event, dedicating all proceeds to outstanding nonprofits. And then the thrill of winning the event with my partner David Faught – it doesn’t get much better than that in the roping world!”

Ullman said he and Peterson feel honored to become involved in the legacy of Di Loreto, who in addition to being the producer of the prestigious RRITR, is also a successful developer, licensed airline transport pilot, founder of the Nevada Military Support Alliance, dedicated community philanthropist, and team roping champion.

“The acquisition of the ‘One Day One Million’ events made perfect sense for Corky and I,” said Peterson, who works in residential and commercial construction in Franktown, Colo., and Cave Creek, Ariz., and who is an owner, with his wife Kami, of Longhorn Productions and Dynamite Arena. “Perry and his daughter Teresa have set the standard for amateur roping events. The RRITR’s commitment to charity and the Nevada community is a true reflection of Perry and his family. We look forward to the next 20 years of RRITR and continuing to support the Nevada community.” 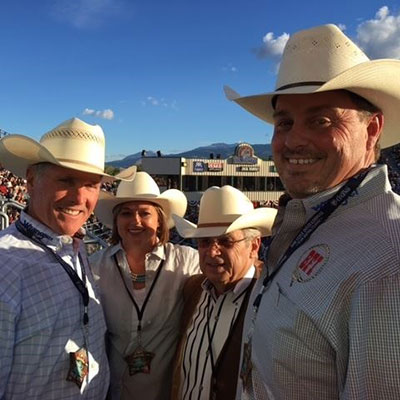