Brennon Eldred is no stranger to good luck in Reno He had it a youth wrestler competing in a tournament of champions events and he’s had it at the Reno Rodeo, winning the Silver Spurs in his rookie year of 2013.

Now’s he added an Xtreme Bulls buckle – and $10,716 – to his Reno memories. Eldred rode the Flying U Rodeo Company bull Yeti for 87.5 points in the championship round and watched the final six riders of the night buck of to give him the championship in front of a near capacity crowd of 8,400 at the Reno Rodeo Arena.

“I don’t know what it is about this place, but Reno has always been good to me,” Eldred said. “I like this town. I’ve been coming here since I was 6 years old for wrestling and I just have always had good luck in Reno. I had two good bulls tonight and it worked out.”

Eldred entered the championship round in seventh place after scoring 79 points on Calico of All In Pro Rodeo in the long round. He said he had never seen Yeti before getting on him in the short round.

“Flying U just bought him from Berger’s so I didn’t know anything about him,” he said. “He came out with a hop and skip and then went to the right and made me work my butt off the whole time.”

It’s a nice boost for Eldred, who has been taking a break through the spring in preparation for a busy summer run of rodeos. He’s heading home to Sulphur, Okla., for a few days before returning to Reno on June 23 for his first-round ride in the Reno Rodeo.

“I’m going to come back for the rodeo and try to get another set of spurs,” he said.

Eldred finished ahead of Cody Johansen of Kersey, Colo., in the average. Johansen rode the Flying U bull Reindiction for 80.5 points to give him a two-ride total of 158. He took home $7,097. Finishing third was Jeff Askey of Athens, Texas, who rode All In Pro Rodeo’s Bank Robber for 81.5 points in the championship round. Askey took home $6,345.

Brett Stall of Detroit Lakes, Minn., had the high score of the first round, riding Wilbur of Big Stone, Moreno and Growney for 88.5 points. He bucked off his short round bull, but still finished fourth in the average and took home a total of $6,815. 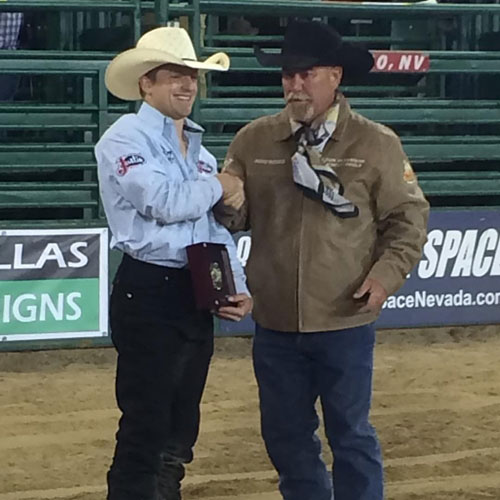