RENO, Nev. (June 21, 2018) – Lari Dee Guy left no doubt about why she’s the winningest female roper of all time on Thursday during BFI Week.

The horse trainer and roping clinician from Abilene, Texas, won first and second in the Charlie 1 Horse All-Girl Challenge. She took home a total of $25,500, along with multiple saddles, buckles, spurs and the custom Montana Silversmiths bronze awarding her mare, Sabrina, as the best head horse of the roping.

“This is the one all-girl team roping I have never won,” said the seven-time WPRA world champion. “I’ve won the Wildfire on both ends and I’ve won the Windy Ryon at both ends, but this was eluding me.”

Wrangler BFI Week, which kicked off in Reno on June 18 with the 41stAnnual Bob Feist Invitational (BFI) and wrapped up with the Charlie 1 Horse All-Girl Challenge, was live-streamed daily on www.wranglernetwork.com. Last year, Ullman-Peterson Events expanded the annual All-Girl team roping to incorporate a #8 Incentive for ladies with lower classifications, and added the breakaway competition and all-around bonus, bringing the 2018 payout to $132,450.

It was the prestigious all-girl roping here in Reno exactly five years ago that prompted Guy to coin the catchphrase “Rope Like A Girl.” The tagline is now sold on apparel and roping accessories across the country.

“Ever since I was a little girl, I’ve watched women rope, and it’s amazing to see 100-plus breakaway ropers here today,” Guy said. “Women’s roping has come so far, and has gotten so tough.”

This year, she nailed the top two call-backs in the team-roping finals. That was on the strength of catching her first three steers with Annette Stahl – last year’s champ – in 24.38 seconds, and roping another three with Whitney DeSalvo in 24.31 seconds.

“Annette told me over at the stalls that it was my year this year,” said Guy.

Despite Stahl taking extra time for a clean catch, their 9.26 moved them to the lead. Then Guy returned to the box and, with DeSalvo, drew a nice steer and capitalized with a quick 6.45. They won the short round and cleaned up the aggregate by a full three seconds.

“My job is easy when you have Whitney or Annette behind you,” Guy said. “Just get out clean and catch the horns.”

“Trevor hadn’t been riding her lately, and my grey horse is strong,” Guy said. “When I said I needed a horse to really handle cattle nice here, he told me to take and use her. I’ve had her a few months and I love her.”

“This is only her second roping back after she fractured her hock last year,” said DeSalvo, who earned $13,000 for her win. “Last year I won the Wildfire, the Patriot, the Charlie 1 Horse in Salado, and the WPRA finals – all on that horse – even while I went back to school.”

DeSalvo attends the University of Arkansas, where she studies health and PE. She drove to Reno directly from the College National Finals Rodeo in Wyoming, where she broke the breakaway roping arena record with a 1.7-second run. Last year, DeSalvo finished third in the All-Girl Team Roping Challenge in Reno – with a cast on one hand.

“It can be harder than it seems to keep knocking them down here, because it’s hard to get into the flow of the roping when everybody gets two and you’re not sure where you stand,” she added. “The prizes here are outstanding, and the prizes for the Incentive are as good as winning the roping.”

DeSalvo gave kudos to Guy for her consistency and her handles – especially aboard the black mare.

“She gave me the same look four times; the same as she did for Annette,” said DeSalvo. “You know when your header is 24-on-three both times, she did the same thing all day and was the most consistent person entered today.”

DeSalvo was formerly only a calf roper until she noticed there was more money in team roping. She rode heel horses for NFR heeler Shay Carroll for four months, then went to work for World No. 1 heeler Paul Eaves for a little over a year.

“I got so much from them, and got to meet so many people and jackpot so much,” said DeSalvo, who watched Eaves place third Monday in the BFI. “[World champion] Jeremy Buhler helps me a lot, too.”

In addition to placing fourth in the average of the Charlie 1 Horse Challenge, Lynn Smith of Cochise, Arizona, and Janey Reeves of Melba, Idaho were the champions of the #8 Incentive with their time of 44.14 seconds on four. They earned $12,000 for placing in the main roping and another $5,000 for winning the Incentive.

Reeves was recruited by Smith to become a student at Cochise College, where Smith coaches alongside her husband, former NFR saddle bronc rider Rick Smith.

“The incentive gives us two chances to win,” said Smith, who is in her third year entering the Challenge. “This is great; the best girls are here and it’s fun to compete against the best. Plus, Rick has friends in Nevada and this is our mini-vacation.”

Smith practiced this month in Wyoming with Reeves while the 22-year-old was in Casper for the College National Finals Rodeo.

“This is the biggest win of my life,” said Reeves, 22, who graduated last month from the University of Idaho. “It’s always so much fun to win at an all-girl roping, because there aren’t very many of them! Especially at one with this much money and especially for a lower-numbered roper like me. Here, if you can go catch four steers clean, you’re going to place in the main roping.”

Annie Houston of Sutter, California, applied the heat to the high-call roper during the 2018 Charlie 1 Horse All-Girl Challenge Breakaway Roping in Reno on June 21, by winning the short round in 3.04 seconds. But Taylor Munsell of Harmon, Oklahoma, chased her last calf to the left and hung onto the lead with a 3.08 despite a field filled with world champs.

“This morning, I wrote my goals down in my phone, and they were to win every big roping and to win the 2018 Charlie 1 Horse Breakaway,” said Munsell.

She roped her three calves in 9.42 seconds to win the average and a record $7,090 plus the custom Cactus trophy saddle, buckle, and plethora of other BFI Week prizes. That total included $1,390 for topping all entries in the sidepot to qualify for RFD-TV’s The American rodeo this winter. The Charlie 1 Horse Challenge served as the first-ever qualifier for breakaway at The American Semi-Finals in 2019.

“It’s awesome they added breakaway to The American,” Munsell said. “To be the first qualifier into it is great. I’m really excited. I’m going to go try to get another qualification, too.”

Munsell had come from the College National Finals Rodeo in Casper, Wyoming, last week, where she set the short-lived arena record at 1.8 seconds for Northwest Oklahoma State University. She hauled to Reno with Whitney DeSalvo, who’d broken her record in Casper the very next night for the University of Arkansas.

“This is one of the most prestigious ropings around,” said Munsell, who only entered the breakaway in Reno. “I knew Annie was going to rope tough, because I’d been watching her all afternoon. But I liked the pressure.”

All contestants received Charlie 1 Horse gift bags, Sherry Cervi shirts and many other goodies in addition to bottles of wine thanks to Purple Cowboy and the “Tough Enough to Wear Pink” team-roping Wheatley family.

“I’ve never been to Reno,” said Munsell. “The facility is awesome, the announcers make it lots of fun; we even got to go to the rodeo.”

Munsell said she expects to put a portion of the $7,090 toward her “broke-down truck in the shop at home,” and to use the rest to “keep entering.” She’ll return to the Charlie 1 Horse All-Girl Challenge next year.

About the BFI:
The Bob Feist Invitational was founded by Bob Feist in 1977 to showcase and reward the world’s best professional team ropers, and is owned today by Ullman-Peterson Events. Annually the top 100 teams in the sport are invited to the Reno-Sparks Livestock Events Center in Nevada, where they compete over six rounds for a cash-and-awards package worth more than $700,000. 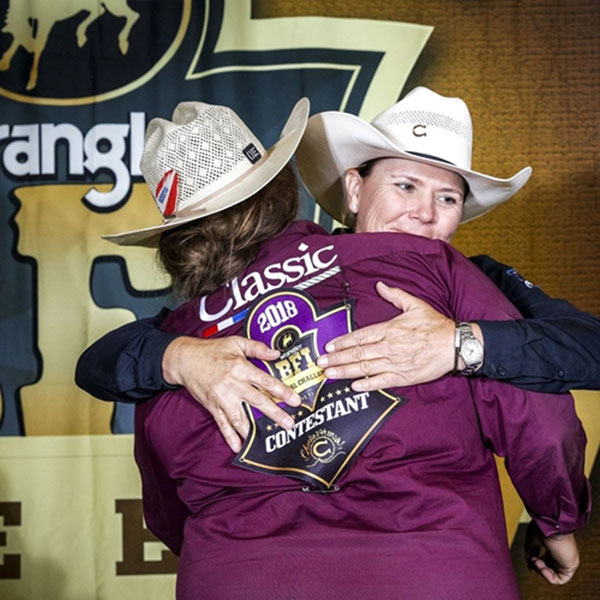