Guy Clifton column: A great tribute to a longtime volunteer

About 30 years ago, Dennis Freeman inadvertently gave 8,000-plus Reno Rodeo fans a moon when his pants fell down during the Businessman’s Steer Decorating Contest.

So maybe it was just coincidence a nearly full moon rose above the Reno Rodeo Arena on Tuesday night as the rodeo paid a final tribute to Freeman, a longtime volunteer who died in August.

Or maybe it was the notorious jokester smiling down from above longtime Reno Rodeo pickup man Jeff Shearer led a riderless horse around the arena, Freeman’s boots turned backward in the stirrups.

“He loved the rodeo, loved being a part of it,” said his wife Carol. “Mostly, he loved the people there. They were his family.”

At the gate where Freeman stood watch for the past 20-plus years, his longtime friends and fellow rodeo volunteers wore suspenders in Freeman’s honor stood beside a large photograph. The gate, long known as “The Clown Gate,” because it is where the rodeo clown and other contract personnel come and go from the arena, also carried a new sign and a new name – The Dennis Freeman Memorial Gate.

The tribute also included one of Freeman’s favorite rodeo performers – the “bull dog” known as Diamond Lil, which spent the past half decade helping to shoo the bucking bulls out of the arena. It was Freeman’s job to let Lil in and out of the arena at the appropriate time and the two had quite a bond.

In the grandstands adjacent to the gate were members of Freeman’s family, who said they knew the tears would mix with laughter as they remembered the many moments of the rodeo in the past 30 years.

Freeman chaired many committees during his years in Reno Rodeo and also served as a director and on the executive board. He was the guy others wanted to ask the tough questions because his of his sense of humor and wit.

In 2006, Freeman was awarded the Reno Rodeo Silver Spurs, the highest honor a member of the Association can achieve.

Well, perhaps now it’s the second-highest honor. In the 97 years of the Reno Rodeo, few areas of the arena are named for anyone. Having a gate named in your honor – now that’s a fine tribute to a fine man.

Guy Clifton is a longtime Nevada journalist and was honored as the national rodeo writer of the year in 2002 by the Professional Rodeo Cowboys Association. He has covered every performance of the Reno Rodeo since 1999. 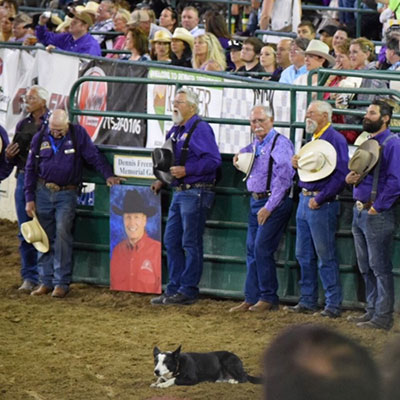