RENO, New. (June 3, 2017) — The “Wildest, Richest Rodeo in the West” kicks off for ten days on Thursday, June 14 with an action-packed celebration of all things Rodeo. Long-time Rodeo fans and newcomers alike won’t want to miss out on all the favorites including the Reno Rodeo Parade, Freestyle Bullfighting and Extreme Mustang Makeover.

Check out this year’s Rodeo highlights below:

Bull Jumping – June 16, 17, 22 and 23
Bull jumper Manu Lataste made his American debut at the Reno Rodeo in 2015 and he’ll return for four nights to the 2017 Reno Rodeo. Bull Jumping as a sport hails from the southwestern French tradition called “Course Landaise” where men and women, without any protection, enter an arena with a Mexican bull. As the bull charges, the skilled jumper leaps and flips majestically over the beast performing spectacular aerial maneuvers. Manu Lataste will close out the Rodeo performance June 16, 17, 22 and 23.

Reno Rodeo Parade — Saturday, June 17
The Rodeo Parade is returning to Midtown Reno on Saturday, June 17 beginning at 10 a.m. and will march north on Virginia Street, from Arroyo to Liberty Street. Spectators will see hundreds of horses plus wagons, the Legendary Longhorns, Miss Reno Rodeo and more. Midtown bars, restaurants and business will remain open during and following the parade.

Freestyle Bullfighting – June 18-21
The “Wildest, Richest Rodeo in the West” is adding an exciting event select nights during the 98th Annual Reno Rodeo. Those who attend the evening performance June 18-21 can watch professional freestyle bullfighters in action. No bulls are harmed in a freestyle bullfight, where the bullfighter goes one-on-one against a bull for 70 seconds, employing spectacular maneuvers like jumping over a charging bull. The bullfighter is judged on his willingness to expose himself to risk by staying as close as he can to the bull throughout the fight. These bulls are bred to be smaller, quicker and more agile than those used in bull riding—the more aggressive the bull, the higher the bullfighter scores. They can compete for years and, like their human counterparts, learn from their mistakes and improve with experience. Three bullfighters will compete each night for three nights, with the winners of each night competing in a final round on Wednesday, June 22.

Invitational Roping Events – June 19-22
With $3.2 million in cash and prizes being awarded over four days, it’s no wonder the Reno Rodeo is known as the “Wildest, Richest Rodeo in the West.” Starting Monday, June 19 at 8 a.m. the Bob Feist Invitational returns to the Indoor Arena. This masters roping event does not disappoint as spectators are treated to the world’s top 100 teams, representing 23 states and Canada, as they compete for the coveted BFI Championship. Next to the National PRCA Championship, the BFI is the most respected event among team ropers.

Extreme Mustang Makeover – June 23-24
This year marks the third Extreme Mustang Makeover at the Reno Rodeo. Each year the Mustang Heritage Foundation selects trainers from a pool of applicants to break and saddle train a wild mustang in 100 days. The horse and rider then perform a choreographed routine at the Reno Rodeo and compete for a piece of the $20,000 purse. The event showcases the reliability and trainability of American mustangs, and offers the audience an opportunity to adopt the newly tamed horses. The finals take place on Saturday, June 24 at 1 p.m. with the adoption immediately following. 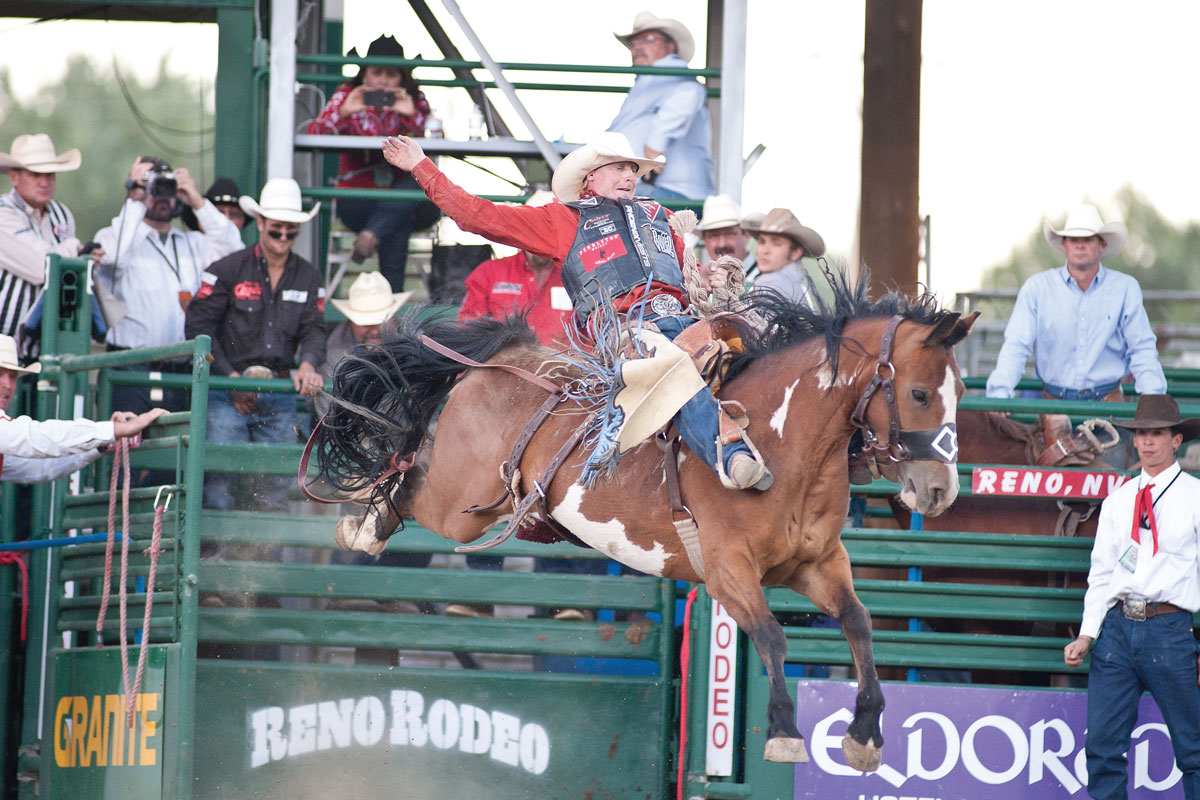